Some of the best augmented reality advertisements from this past Fall 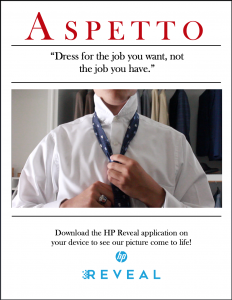 The group that created this advertisement also created a flyer for Aspetto (founded by two UMW alumni). The ad wanted to showcase the clothing options and prices consumers have at Aspetto.

Directions to activate the AR feature: 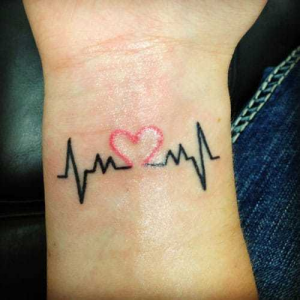 The group that created this ad had the idea that a tattoo can be more than an image, it can provide vital information in case a person is having a medical emergency or if someone is unable to communicate.

The post Some of the best augmented reality advertisements from this past Fall appeared first on Kashef Majid's Website.

To complete this portfolio, I had to identify at least four of my past projects  that I’d like to improve somehow. Three of the projects I selected were my favorite projects (Poetry, Noetry, Clock, and NaNoGenMo) while the last one was the most challenging project that I met with Professor Whalen about.  (Glitch)

I have learned a lot from this class about coding. I don’t really use my computer unless it’s for catching up on my Netflix/Hulu shows or writing papers. Other than that, my laptop is basically useless to me. This class forced me to learn many thing about my computer and its apps. I think what I will carry from this class into my future classes is the use of Audacity and altering images to make them unique for presentations or for just making recruiting videos for Rugby. I can also now use my knowledge of all of the sites we use for future jobs, which is really great. I would definitely take a second class of Creative Coding to learn more things about my computer and about coding. Thank you so much for taking a chance and offering this class this semester, and I hope to see more DGST classes like this in the future.

Welcome to WordPress. This is your first post. Edit or delete it, then start writing!

For my final project, I created a multi dimensional movie. I used pictures, a voice audio, a video, and songs. I got all my music from mp3juices, and the explosion from freesounds. I really enjoyed making this. It didn’t go exactly how I planned it at first because I planned on making it in my apartment for one, but I shot the videos today in jepson since I never left that building. I also wanted my boyfriend to play Solenya, but I didn’t think he was going to  make up the monologue for Solenya the way I wanted., so I just did it myself. INDEPENDENT WOMAN! I thought it turned out pretty decently though. I made the movie all with IMovie in jepson, and I downloaded all the universe pictures and atom and molecule pictures from google. I just took a few of the pictures I had of my little brother from my phone to use in it as well. Everything I got off of my phone, I downloaded it through google drive first and then imported it into IMovie. I found that to be the easiest way a few projects ago. The last thing I did was upload the video onto youtube.

No, my little brother doesn’t know he died in my video, but he was reluctant on making the “yeah suly?!” audio. I made him say that the day after Thanksgiving when I was about to drive back to my apartment, so it was late and he’s 13, so you know how that is ahhaha. Everything else was a piece of cake since I’ve been doing this all semester now.

This class was a challenge for me this year with how much work went into it, but I definitely know way more about the computer than I would’ve before, so thats cool.

Also, my hair is growing out right now, so it’s always a freaking mess!

Lorna Mills is a new digital media artist originally from Canada, whose work has been showcased in solo and group shows since the 1990’s. Lorna Mills is also a founding member of the Red Head Gallery, and her work underlines themes of obsessive habits and traits that are paradoxically limited by space, time, and resources. The new media artist is one that dissociates images and references from the internet to create an unhinged and chaotic GIF that overwhelms the viewer in installed spaces.  Lorna Mills briefly underlines her creative approach in collaborative projects and sources of influence in an interview with Leah Sandals in her article titled Lorna Mills on GIF Art, Internet Aesthetics & NYC Fairs” as well as “Everything I do Has the Smell of Digital”: Lorna Mills on Her Art” by Mira Dayal. When installing her digital creations Lorna Mills initially maps out the scale and location of projectors and multiple digital screens for the viewer to be enveloped by. ‘I create renderings of the space and plot out the locations and scale as much as possible…; its the limitations and context that make installations interesting.’ Mills admits that she spends around an hour a day looking at GIFs through Reddit, Google+, Porn Fail, and a bunch of Russian sites. Mills elaborates on her interest towards ‘internet filth, inter-species romance, masturbating penguins and people waking with plastic dolphins.’ Mills is more interested in subcultures than pop-culture. Lorna found her niche within the GIF making market by focusing on ‘marginalized peculiarity.’  This is not done through regenerating and appropriating popular culture narratives and motives rather, Mills emphasizes the obsessive essence of her animated GIFs and digital oeuvre are resultant qualities of the internet.  The fine art market has always been used as a visual language mechanism to distribute values, habits, and traditions across a broadly accessible spectrum of viewers, patrons, and audiences; the introduction of the internet and technologies has monetized digital work in the art marketplace allowing for artists such as Lorna Mills to present obscure and vulgar critiques on ‘marginalized kinks’ that the internet harbors as groups share and communicate values through a digital space.