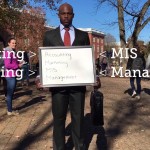 This past semester the students in the Principles of Marketing class (Mktg 301) created advertisements for the College of Business.  Each semester, students have the opportunity to create advertisements for a community partner.  Last year we created ads for the Fredericksburg SPCA, next year we’re creating advertisements for the Virginia21 (get out the vote campaign).  The students are given equipment and a brief tutorial on video editing then the rest is up to them.  Overall they did a wonderful job, I’ve posted links to all of the ads here.  Some of the ads will be used in official UMW communications.

Advertisement 1 – Evolution of an undergrad

Advertisement 3 – It’s a great day to be an Eagle

My group compared the tweets about the NBA and the MLB. We did this because the MLB season was in the World Series stage of their season and the NBA season was just starting. It seemed there was more activity in the MLB realm just because of the simple fact that it was a bigger stage in their respective season.

Personally I have had both good and not so good experiences with online anonymity. Good experiences include things like random “strangers” wishing me luck or giving me advice. Bad experiences include but are not limited to name calling, bullying, harassment, and even threats. everything always turned out fine in the end; however, when it comes to the use of online anonymity, I believe more filters need to be set in place to protect people from others blatantly out to hurt them. I myself have experienced the effects of online anonymity and as I always have been, believe that if you don’t have anything nice to say, then don’t say anything at all.

My digital project has changed in format and concept so many times since it first began. I am very excited to see the final product of the website. The website has tons of customized pages, graphics, and more. All of the time and effort that has gone into this project will all pay off when i get to see the finished product.