The last and final design assignment I completed this week was worth 3 and 1/2 stars and was called One Story / Four Icons. I love bored games, trivia, and guessing games so this assignment called my name! First I had to decide on a movie that I could boil down to just 4 main images/icons. Once I decided on the movie, I google searched for those icons! Then I complied them into a collage, and bang! A great guessing game! Can you guess what movie I chose? 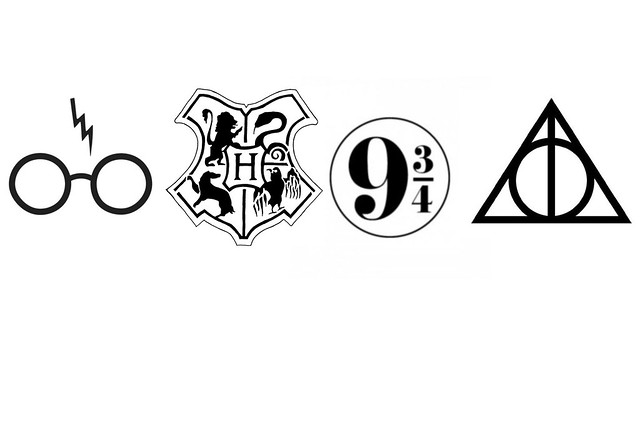 For this design assignment worth three stars, I created a story using symbols found in Harry Potter. For those who are not fans of the book/movie series, some of these symbols would be unrecognizable. But for those that enjoy the series, these symbols mean a lot to the viewer and convey a story!

The first symbol is a pair of glasses and a scar, which represents Harry Potter. The next is the Hogwarts School of Witchcraft and Wizardry crest, which symbolizes the four houses of the school. The next is the symbol 9 3/4, which is the platform number of the train that Harry and all his friends get on and takes them from the Muggle world to the Wizard world. The last is the most important symbol in all the series, which stands for the Deathly Hallows. The vertical line represents the Elder Wand, the circle represents the Resurrection Stone and the triangle represents the Cloak of Invisibility.

These symbols all tell important factors in the Harry Potter series, and convey the message of the last book, Harry Potter and the Deathly Hallows.