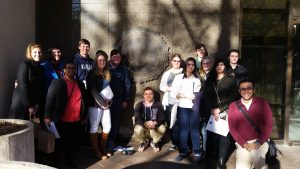 Last month we were fortunate enough to tour the FBI Headquarters in Washington and hear from some of the agents on the work that they’re doing.  The tour was arranged by the father of one of our alumni and from the moment we arrived to five hours afterwards when we left the FBI really went out of their way to give us an inside perspective of the work that the FBI does.  We heard about the billions of dollars that the FBI manages.  We also learned about the work that field agents do, the importance of counter-terrorism, and the fight against white collar crime including the infamous Bank of the Commonwealth case.  The once in a lifetime experience represents the advantage of being part of a school that has such a strong alumni network and is located close to our nation’s capital.